Imagine an Aeroplane flying 1mm above the ground and circling the earth once after every 25 seconds while counting every blade of grass shrinker that down so that it fits your palm on the hand and you would have something equivalent to the modern hard drive. The hard disk is the marvellous component comprising many electronic devices
including computers, iPods, Notebooks, TV’s, Washing machines etc. The ordinary hard drive has extraordinary details and nowadays most of us are well familiar with the essence of hard drives.

The key component in computer operation is magnetic data storage. The ability of the magnets to magnetise other metals and the ability of other metals to retain the magnetization, until it is forced to change again by exposure to another magnetic field, is the fundamental concept behind data storage in almost all types of hard disks. We already know that any metallic object can be magnetised to North and South Pole or either.  The data we store in the computers are in the form of one or zero (Binary form). The actual representation of binary code 1 and zero is performed through north and South Pole. A bit is the smallest unit of data storage and it can be visualized as a mini rectangle block of metallic particles that can be magnetised into a permanent magnet. The practically bit is a block consisting of very small particles of metal pointing north side up or down indicating 1 or zero respectively. 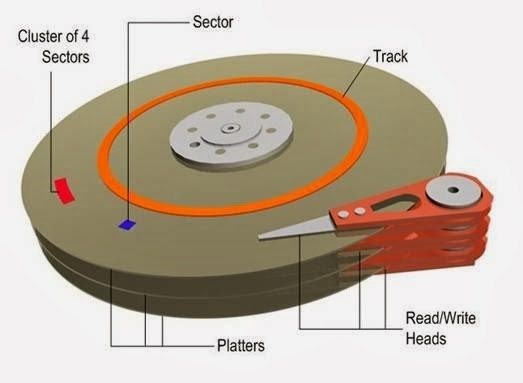 Computer hard disks consist of shiny, circular “plates” divided into billions of tiny areas which can be independently magnetized to store one or demagnetized to store zero. A circuit board controlling the back and forth moving the head, comprises of the electromagnet, mounted on a read/write arm magnetizes or demagnetizes the platters surface to store information. Another amazing ability of the magnetized surface is that it remains magnetized or demagnetized even if the power is turned off which helps the data to remain on the surface of the platter even when the power is switched off. The circuit board in a hard disk not only controls everything but it also act as an interface between the hard drive and the rest of the computer. Memory is not only about storing the data but storing in a manner that it can be quickly found out later. The computer hard disk does this by storing the data in a well organised manner in the form of tracks and sectors on platters. It is also known as File Allocation Table (FAT).

Components of the Hard Drive 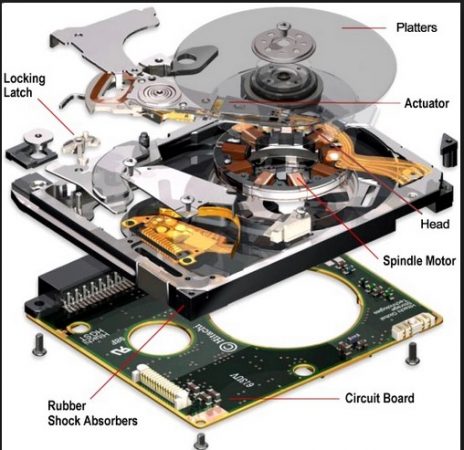 Hard disks mostly comprise of following types of components which play a vital role in storing, reading, modifying and searching data on the hard disks.

The PCB circuit board in any modern hard drives acts as the head quarters. It controls the actuator arm to move back and forth and also controls the electromagnet mounted on the head to magnetise or demagnetise the surface of the platter. It helps the motor to move with a constant speed of seven thousand two hundred revolutions per minute without touching the surface of platters.

The actuator arm is responsible for reading/writing, modifying and locating data on the platters. The arm has the access to all the tracks and sectors on the platters and it moves hand in hand with the electronic circuit board. The read/write heads, electromagnet, is positioned on the tips of actuator arms to locate the data quickly and the head never actually touches the disk surface. The space between the head and the disk is almost 5 thousand times thinner than a human hair and it flows on a cushion of air created by the spinning disk. The engine that drives the arm is invisible because it’s an electromagnetic system driven by two forces of nature, electricity, and magnetism which moves the arm back and forth on the disk with lightening speed.

Disk read/write head is responsible for magnetizing and demagnetizing the surface of the platter. It is electromagnet device which moves above the disk platters
and transforms the platters’ magnetic field into electrical current (Faradays Law) to read the disk and vice versa to write on the disk. The flying height of the head is responsible for the areal density of the hard disk. The crash of head over the disk can result in a catastrophic crash. The coil in the head is energized and strong magnetic field forms in the gap between the C and the surface of the adjacent platter is induced while writing information on the platters.

The spindle motor spins the hard drive disk at exactly seven thousand two hundred revolutions per minute. It is controlled by the circuit board. It is an electrically communicated motor which is known as spindle motor it also carries the platters and rotates it around its own axis. The capacity of modern hard disks greatly depends upon the type of spindle motor.

Platters are made up of aluminum, glass or ceramic disk that is always coated with in a magnetic media and located inside a hard drive to permanently store information. When the computer is switched on these platters start rotating with 7200 rpm and enable the actuator arm to read the information. Each platter in the hard disk is segregated into tracks, sectors, and cylinders to easily locate the data stored. The number of platters found in a hard drive depends upon the amount of data storing capacity but if the hard drive is SSD then it has no platters in it. 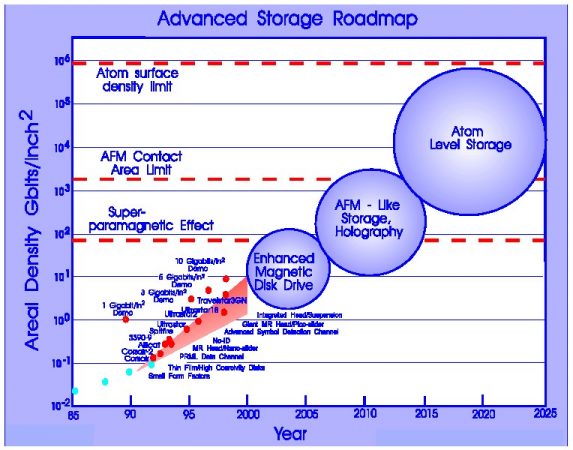 As we have already seen magnetic are essential components to data storage. This amazing advance in storage capacity was not just a matter of making everything smaller but involves multiple innovations. A technique called a Thin Film Lithography Process (TFLP) allow engineers to shrink the reader and writer and despite its size, the reader becomes more sensive by taking advantage of new discoveries in magnetic and quantum properties of matter. Bitts can also be packed closer together, thanks to mathematical algorithms that filter out noise from magnetic interference and find the most likely bit sequence from each chunk of leave back signal. The thermal expansion control of the head enable by placing a heater under the magnetic writer allowed it to fly by less than a 5 nano meter above the platter surface about the width of two strands of DNA. Around 100 Giga bytes per square inch shrinking the magnetic grains further posed a new risk called a Super Para Magnetic Affect in which the magnetization of the magnetic grains are disturbed by heat energy and causing a random change in the polarity resulting in data loss kamhe9e. Scientist resolved this limitation is a remarkably simple way to changing the direction of recording from longitudinal to perpendicular allowing aerial density to reach 1 tera byte per square inch. The potential limit has been increased yet again through Heat Assistance Magnetic Recording (HAMR). This uses even more thermally stable recording medium whose magnetic resistance is momentarily reduced by heating up a particular spot by a laser and allowing data to be written well those drives are currently in a prototype stage.

Scientist already has the next potential trick up their sleeves Bit Pattern Media (BPM) where bit locations are arranged in separate nano sized structure potentially allowing for aerial densities of 20 tera byte per inch square or more.