Inbox, the latest creation stemming from Google’s Gmail service is a task-oriented application that is designed to further improve the efficiency of the user through smartphones and tablets. However, now, after finally gaining compatibility for the Android Wear platform, wearable owners have a treat waiting for them. After downloading and installing Inbox on their Android Wear operating system, users will open up another door of notifications.

These notifications will obviously include the option of sifting and checking their emails, along with the option of replying to those emails and marking those which you have already read. While it might present a cumbersome experience to type on such as small screen, speech-to-text recognition software has been integrated to Inbox in order to make the operation less tedious than before. Whatever operation you were carrying out on your smartphone or tablet when Inbox was concerned, can now be executed from the palm of your wrist. 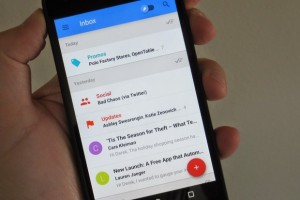 Gmail was announced way back in 2004, and has since then providing thousands of office and casual users with a flexible backbone to communicate efficiently and effectively. In addition to Inbox, Google’s office applications, which are all present in Google Drive, provide online document submission flexibility to a copious number of users. Google Drive’s Windows and MAC OS X application allows you to sync your files, folders and different content comfortably.

Even though there was a long time difference between Gmail and Inbox, the introduction of the latter has brought about a new degree of flexibility. Inbox can easily be downloaded for the Android and Android Wear platform.In order for the app to work, you will be required to run Android version 4.1 or later otherwise you will most likely run in to compatibility issues.