While a myriad number of gaming applications are present on smartphones and tablets, they are nowhere near the level of graphic fidelity that desktop and laptop graphics are able to render. While it will take a long time for desktop and laptop class graphics to appear on smartphones and tablets, Imagination technologies, a chip designer placed in England, has found a way to expedite the process. The company’s current mobile GPUs, which have been given the model name PowerVR GX6650 are graphical powerhouses when it comes to rendering mobile graphics.

The chip designing company’s current flagship GPU; the PowerVR GX6650 is one that has been incorporated in to Apple’s flagship tablet, the iPad Air 2, which features an A8X chipset; a chipset that runs a tri-core processor. When pitted against the Nexus 9, which is the world’s first device to be fitted with NVIDIA’s Keplar based Tegra K1 SoC with a Denver CPU, both tablets reach a stalemate according to the benchmarking reports, indicating the mobile graphics rendering capabilities of the PowerVR GX6650.

The company’s upcoming GPU series, the Series7xt GT7900 will possess the same graphical performance as NVIDIA’s GTX 750 thanks to its technical details. It will possess 16 clusters, along with 512 ALUs (arithmetic-logic units). In addition, the chip’s peak theoretical performance will scale above 1 teraflop, making it a formidable GPU for not only its direct competition (mobile GPUs), but for the indirect competition too (desktop and laptop graphic chips). According to the company, the Series7xt GT7900 will be able to deliver more than 60 percent the performance of Imagination Technologies’ current flagship mobile GPU, the PowerVR GX6650. In addition to the performance, the upcoming series will also possess the following technologies. 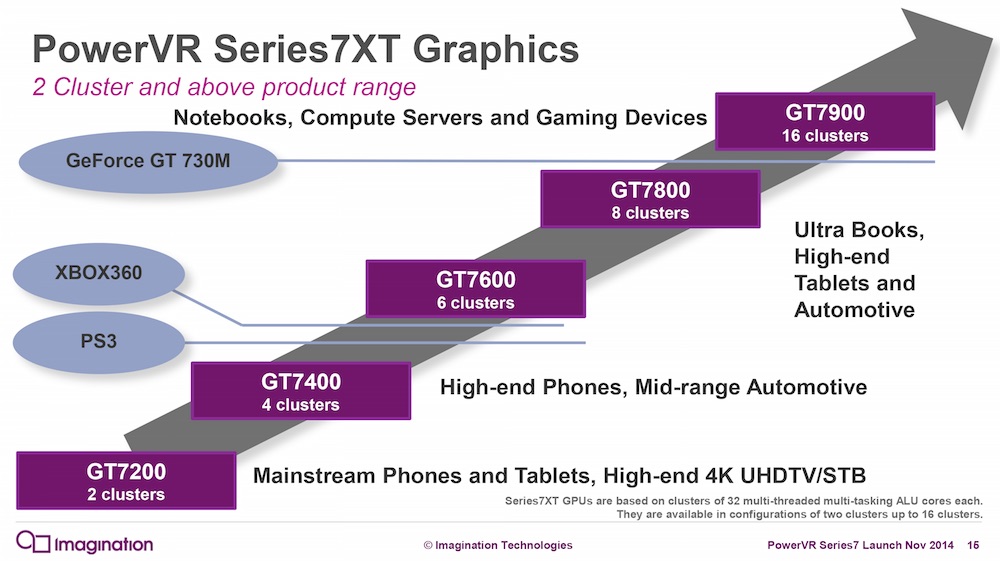 While the Series7XT GPU is looking to be an extremely impressive mobile GPU specimen, chances are that it will not be unveiled for at least a year. During this period, Apple will be looking to incorporate the powerful mobile GPU in its upcoming devices; one that will either have Apple’s A9 or A10 SoC. It will be interesting to see what Qualcomm has in store in the mobile GPU department. For a company that has the majority of the market share percentage in mobile chipsets, it is very likely that the company will be releasing its Adreno 500 series GPU. As for NVIDIA, the company is most likely working on its Maxwell based chipset to combat the impressive numbers of the Series7xt GT7900. While the Maxwell architecture is thoroughly impressive in the desktop and laptop market, the mobile category is a whole new ball game altogether.